Oftentimes, I get inspiration from other sources than the usual magazine or blog.  And one source that’s always fed my imagination has been television.  It definitely started as a young child when instead of going outside to play–as this was New York city and deemed too dangerous by my parents–pictures danced before my eyes of the world.  I was hooked.

If I really traced my love for specific silhouettes, like a great fitting pencil skirt, the line would start at the seminal 1990’s t.v. series Twin Peaks.  The auteur David Lynch’s first hand at the small screen was a great escape from my thirteen-year-old concerns.  And in some ways, the show was a love letter to all the glamorous film actresses of yesteryear (while I covered my eyes at the violent scenes–a source of some of my nightmares to this day.)

The women of this make-believe town were fascinating, particularly the actresses Joan Chen and Sherilynn Fenn.  Like the mystery that shrouded the town, there were a swirl of styles (and eras) the women dressed in. 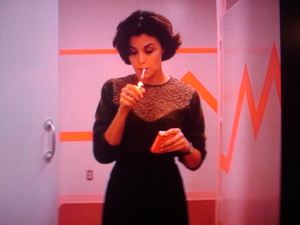 Sherilynn played Audrey, the inquisitive teenager who had a rebellious streak.  Her character presented this attitude with a decidedly fifties look: fitted sweaters, schoolgirl skirts, always paired with saddle shoes or kitten heels. 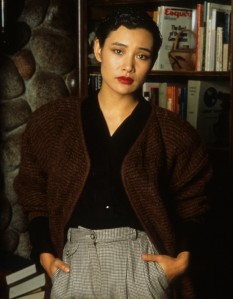 Joan was Josie, the new owner of the local mill after her husband’s deathly accident.  She sported marcel waves in her hair and wore clothing with menswear detailing.  It was if she had stepped out of a 1920’s black and white film.  Even as a young girl, I knew there was a lack of people who looked like me on screen, so it was thrilling to see an Asian woman on my favorite show.  It’s no wonder that Twin Peaks left such an impression on me.

So you can imagine my excitement to hear that the town will come to life again on Showtime in 2016!  Till then I’ll listen to the theme music and wear a swipe of classic red lipstick in tribute.

To book an appointment with Miramar Dichoso, personal fashion stylist, email her at miramardichoso@gmail.com.